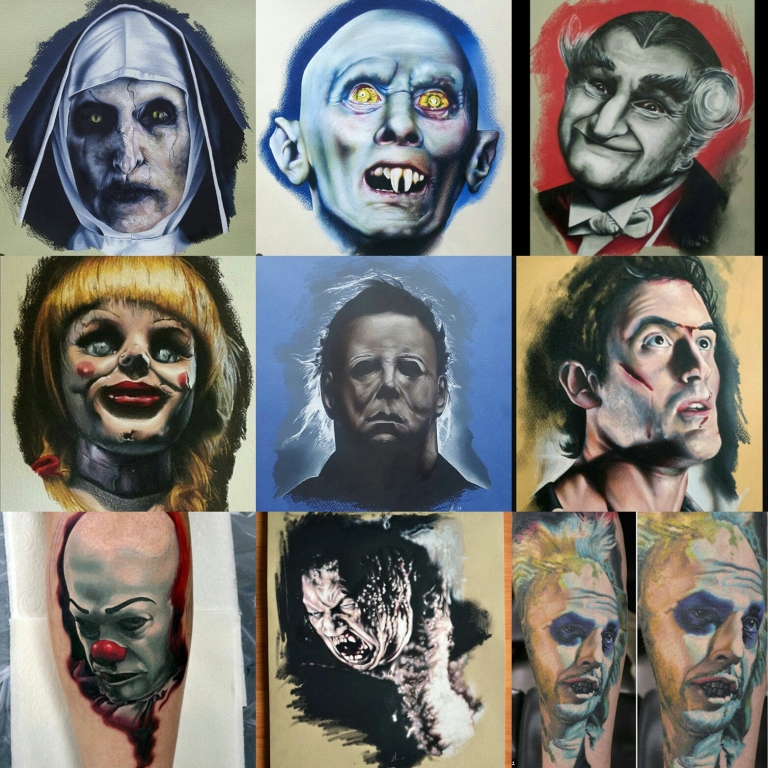 When did you become a fan of horror?
I was always a child that was interested in the “horror” section of the local video store, mainly looking at the VHS covers as obviously we were never allowed to rent them. As I got older and started to shop in local comic book shops I’d see the cool lines of action figures and larger models based off of horror characters, which I was fortunate enough to have a couple as a teenager. My teenage years were when I really became a lot more interested in horror films, from all different era’s, my interest has continued to grow from there.

Are you self taught or did you attend college?
I studied Art at high school, I managed to persuade my teachers to allow me to drop out of PE lessons and do extra Art lessons as I wasnt a particularly athletic person. After high school I attended a local 6th form and continued to study Art alongside Graphic Design and some other more academic subjects. As far as my tattoo work, I was fortunate enough to get an apprenticeship, pretty much after finishing 6th form, I have been very fortunate to have the oppourtunity to learn from many people so far in my career.

What medium do you use to create your work?
The majority of my artwork is colour pencil, alongside pastels. I have played around with oil painting before and have recently started working digitally.

Where do you get your inspiration from?
I get inspired by a lot of things, other artists, films, photography, music. I follow many different people on social media and am a fan of very different styles of art.

What’s your favourite piece of work so far?
I’m probably my harshest critic, currently one of my favourite pieces is a colour pencil drawing i recently finished of Norris from The Thing, when his head has decided to stick to the ceiling. As far as my tattooing goes, I have a handful of big pieces I’m proud of, my favourite single piece recently has been a colour portrait of Michael Keaton as Beetlejuice.

What are your upcoming projects?
At the moment I’m working on a few different Sticker Packs that I will be selling on my Etsy (etsy.com/ahop/alanaldredmerch) I’m always planning ahead as far as what portraits I will draw next, I like the idea of organising a horror themed exhibition at some point in the future, featuring work of other horror based artists and raising money for a charity. We’ll have to see what happens!

What’s your favourite scary movie?
Thats a difficult questions! The horror films I can watch often and never get bored would be; The Thing, Return Of The Living Dead, Prince Of Darkness, Evil Dead.